Following the defeat of Lord Goring at the battle of Langport and the capture of Bristol from Prince Rupert, the south-west of England was effectively closed to the King from mid-September 1645. In order to secure his position before advancing to complete the conquest of the west, General Fairfax sent Colonel Rainsborough to besiege Berkeley Castle, the only Royalist stronghold between Bristol and Gloucester. Rainsborough stormed and captured Berkeley after a three-day bombardment on 25 September 1645. Meanwhile, Lieutenant-General Cromwell marched with three regiments of horse (his own, Fleetwood's and Sheffield's), four regiments of foot (Pickering's, Montagu's, Waller's and Hammond's) and a formidable train of artillery to clear remaining Royalist strongholds threatening the road between Bristol and London.

Devizes in Wiltshire had been a secure Royalist stronghold since the decisive defeat of Sir William Waller's army at Roundway Down in July 1643. When Cromwell arrived before the town in September 1645, the garrison, commanded by Sir Charles Lloyd, took refuge in Devizes Castle and the Parliamentarians quickly overran the town. On 21 September, a battery was set up in the market place aimed at the castle. Cromwell issued a summons to surrender. Lloyd declared his intention to hold the castle until the death of the last man. Cromwell ordered the bombardment to begin the next day and it continued into the night. Lloyd was persuaded to surrender after a mortar shell landed in the powder magazine, killing a number of men.

After the surrender of Devizes, Colonel Pickering's regiment marched to join local forces before Lacock House near Chippenham, which surrendered on 24 September. Another detachment under Major Harrison went to reinforce Colonel Norton, who was trying to suppress an uprising of Clubmen in Hampshire. Meanwhile, Cromwell advanced with his main force to Winchester, which was defended by a garrison of 700 men under the command of Lord Ogle. When Cromwell summoned the city on 28 September, William Longland, the mayor of Winchester, pleaded for time to persuade Ogle to surrender. The next day, Cromwell's forces occupied the city and the Royalist garrison withdrew into Winchester Castle. Cromwell offered a safe conduct to Dr. Curle, the bishop of Winchester, who was present in the city, but the bishop was suspicious of Cromwell and also took refuge in the castle.

Lord Ogle refused to surrender Winchester Castle even after Cromwell had set up his batteries and fired a warning salvo. The bombardment began in earnest on 4 October 1645. It continued relentlessly throughout the following day. When a breach opened in the castle defences, Ogle lost heart and requested a treaty. Colonel Hammond and Major Harrison agreed the articles of surrender with him on 5 October. The castle was found to be well-supplied with provisions. The Parliamentarians also captured a large supply of weapons and ammunition.

In order to encourage support for the New Model Army amongst the local population, and to pre-empt any further trouble from Clubmen, Cromwell maintained strict discipline among his troops; any soldier caught plundering or harassing civilians was summarily hanged.

The fortress of Basing House, seat of the Marquis of Winchester, had been a Royalist stronghold since the beginning of the war. Situated on the main road from London to the west, it had been attacked twice by Parliamentarian armies: the first siege in November 1643, the second siege from June-October 1644. The Marquis declared that he would hold Basing in the King's name forever, in accordance with his family motto Aymez Loyaulté — "Love Loyalty" — which he is said to have engraved with a diamond on every window pane in the house.

Basing sheltered many Royalist fugitives and refugees and was notorious among Puritans as a refuge for Roman Catholics, amongst whom were a number of priests and Jesuits. Religious antagonism had developed between Anglicans and Catholics in the garrison itself. In May 1645, the Marquis petitioned King Charles for the removal of all Protestants from Basing, including the military governor Sir Marmaduke Rawdon who had directed the defence of the first two sieges. The King granted the Marquis's request and Rawdon marched out with his regiment on May Day 1645, leaving Sir Robert Peake in command of the Marquis's own regiment of foot and a number of Catholic reformadoes.

The third siege of Basing House was initiated in August 1645. Colonel John Dalbier was ordered to reduce Basing with artillery sent down from London and local forces from the Hampshire, Sussex and Surrey. A skilled military engineer, Dalbier carefully surveyed the defences and planned the deployment of his guns to maximise their effectiveness against Basing's walls. The bombardment began in mid-September. By the end of the month, the Parliamentarian guns had weakened the defences in several places. Dalbier also experimented with a form of poison gas: bales of wet straw impregnated with arsenic and brimstone were set alight to create a noxious smoke. The wind carried the stifling fumes over the House, which reduced the morale of the garrison further. However, Dalbier did not have enough troops at his disposal to attempt to carry the fortress by storm.

The final stage of the siege began with the arrival of Lieutenant-General Cromwell's detachment from the New Model Army on 8 October. Cromwell's artillery train contained some of the most powerful siege guns then known, including a canon-royal, which fired a 60-lb shot, two demi-cannon firing 30-lb shot and at least one mortar. Richard Deane, the New Model Army's Comptroller of Ordnance, directed the emplacement of the battery on the south-eastern side of the House. With Cromwell's arrival, the total strength of the Parliamentarian force before Basing was probably around 7,000 men; they were faced by a garrison of 300 Royalist defenders. By 11 October, Deane's artillery was in position and Basing was completely encircled by Parliamentarian siege works. Impatient to conclude the siege, Cromwell issued a curt summons to surrender with a warning that no mercy would be shown if his demands were rejected. Encouraged by the Catholic priests in the garrison, the Marquis of Winchester remained defiant. The Parliamentarian artillery opened fire on 12 October. After two days' bombardment, the heavy guns had breached the walls in at least two places and Cromwell ordered a general assault for daybreak on 14 October.

The storm was brief and bloody, lasting less than two hours. The assault was led by the regiments of Pickering, Dalbier, Montagu and Sir Hardress Waller, attacking from different directions. There were too few defenders to withstand the massive strength of the New Model Army. The Royalists were quickly driven back from the outer defences to make a last stand at the gatehouse of the Old House. A call for a parley from the defenders was ignored by the enraged Parliamentarians. Civilians as well as soldiers were slaughtered in the assault, including a number of Catholic priests. Between one and two hundred defenders were killed, the rest taken prisoner. The Marquis of Winchester is said to have been captured whilst hiding in a bread-oven. The architect Inigo Jones, who was among the civilians at Basing, was carried out naked, wrapped in a blanket. 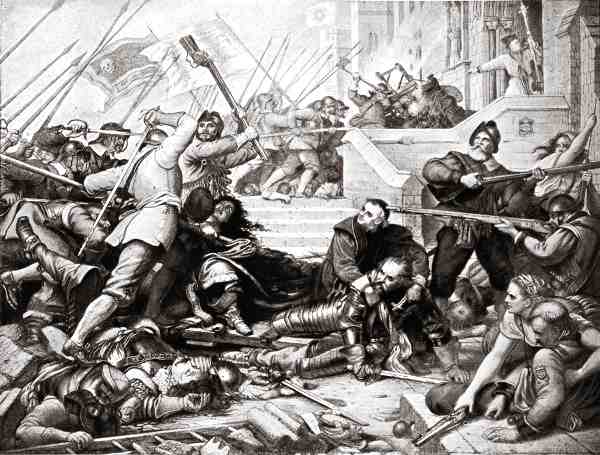 The Defence of Basing House by Charles West Cope

Cromwell allowed his troops to plunder the incredible riches of the mansion: plate, jewels, hangings and furniture to the value of £200,000. A legend persists of a rich treasure still buried in the grounds. The soldiers profited from a public sale which lasted for several days. A wagon load of popish books, pictures, rosaries and relics was sent to a public bonfire in London. Having been looted bare, Basing House itself caught fire, possibly by accident. It burned for twenty hours until nothing was left but bare walls and chimneys. Even these ruins were demolished by order of Parliament, the stones and bricks carted away for use in other buildings in the locality. 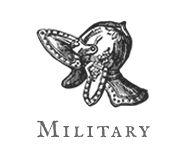